Didier Drogba is a Chelsea legend without a shadow of doubt after he produced several big occasions for the club including the 2012 Champions League final in Munich. Drogba played a major role as Chelsea beat Bayern Munich in their own stadium to win the Champions League title for the first time. 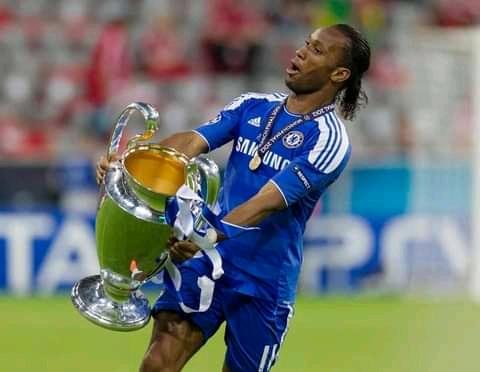 Chelsea were almost down and out when Thomas Mueller scored the opening goal seven minutes from time before Didier Drogba produced his magic to take the final into extra time. His bullet header rippled the net from a Juan Mata corner kick with five minutes separating his goal and that of German international Mueller. Chelsea rode their luck during normal time and extra time with Chelsea goalkeeper Petr Cech saving a spot kick from flying Dutchman Arjen Robben to take the game into the dreaded penalty shootout. In the end, Didier Drogba scored the winning penalty for a 4-3 victory for his team.

His impressive display in the 2012 Champions League final highlights how he always stepped up in the big games especially in the cup finals. In recent times, Chelsea have made a habit of losing cup finals and their fans are not happy. They have been vocal about how Didier Drogba has been missed for those cup finals. He had a very good scoring record in those types of matches. Drogba scored nine goals in ten cup finals.

West London side Chelsea have lost four successive cup finals on the domestic front including the fact that they became the first team to lose three straight FA Cup finals. They have been beaten by Arsenal, Leicester City and Liverpool in the last three FA Cup final editions.

In addition to those FA Cup final defeats, Chelsea were also beaten by Liverpool in the League Cup final this year.